A Quarantine Reflection: Which version will you choose?

In the mountains of Peru, the Quechua people make an offering before any celebration to the "Pachamama" (their version of Mother Earth). This ritual is a way for the inhabitants of the land to pay homage to where life comes from. It's a restoration of reciprocity between human beings and nature.

Over the past four months, we've been forced to partake in this ritual via a historic, global shutdown. And Pachamama has thrived, starting the celebration ahead of us.
‍
As we begin to re-enter the world, turn on our cars, and resume to 'normal' activity, we can't forget what she has shown us.
‍
We finally saw our impact on the planet. Before quarantine, we had no relative perspective to compare to our current environmental health. People could talk about global warming or climate change, but it seemed abstract, distant, and not pressing. For the first time ever, we were given a before and after photo.

In Peru, the families we know entrenched in the mining industry have been watching birds and fish return to the normally contaminated lakes. In Washington, an 82-year old told me how amazing it's been to watch the mountains rewind to how they looked as a teenager. In northern India, residents can see the Himalayas from 100+ miles away for the first time in 30 years.

Record-breaking, worldwide improvements in the Air-Quality Index (AQI) were hit. AQI, based off fine particulate matter (PM2.5), is an air pollutant that's detrimental to health when levels are high. Before quarantine, India topped the charts, home to 14 of the 20 cities with the most hazardous air. However, in the first week of April, Dehli recorded a pollution reading of 38 AQI (previously, it had been known to surpass 200!) - about as good as anywhere in the world.

Consider how many lives have been saved from respiratory deaths due to this global improvement in air-quality. Residents in Dehli, India were legitimately celebrating because they could finally see blue skies. Dr. Pankaj Sayal (Delhi-based pulmonologist) said, “Right now, in this season, I’m getting only 20-30% of the calls” as normal.

In Southern California, levels of harmful PM2.5 have dropped by 40%, as the number of vehicles on the road has declined by 80% in the traffic-heavy city, according to scientists at UCLA’s Fielding School of Public Health.

NO2, the gas emitted by cars, power plants, and  factories from burning fossil fuels, dropped across the globe (see below). Satellite images from the European Space Agency (ESA) show a dramatic reduction in atmospheric NO2. Specifically, Madrid saw levels fall by 56% in March, according to the European Environment Agency (EEA).

Satellite images comparing tropospheric NO2 levels 'before' and 'during' quarantine: 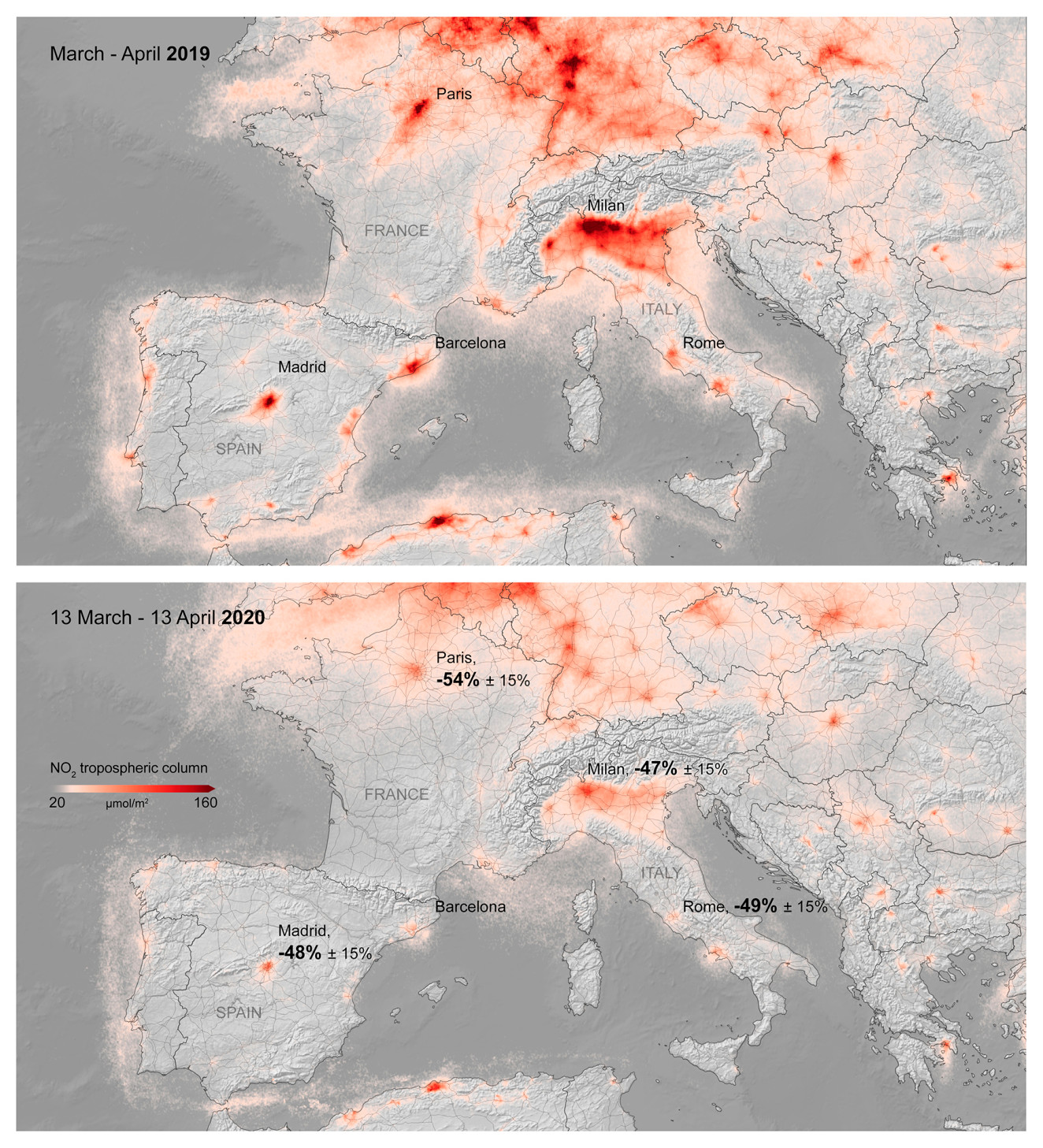 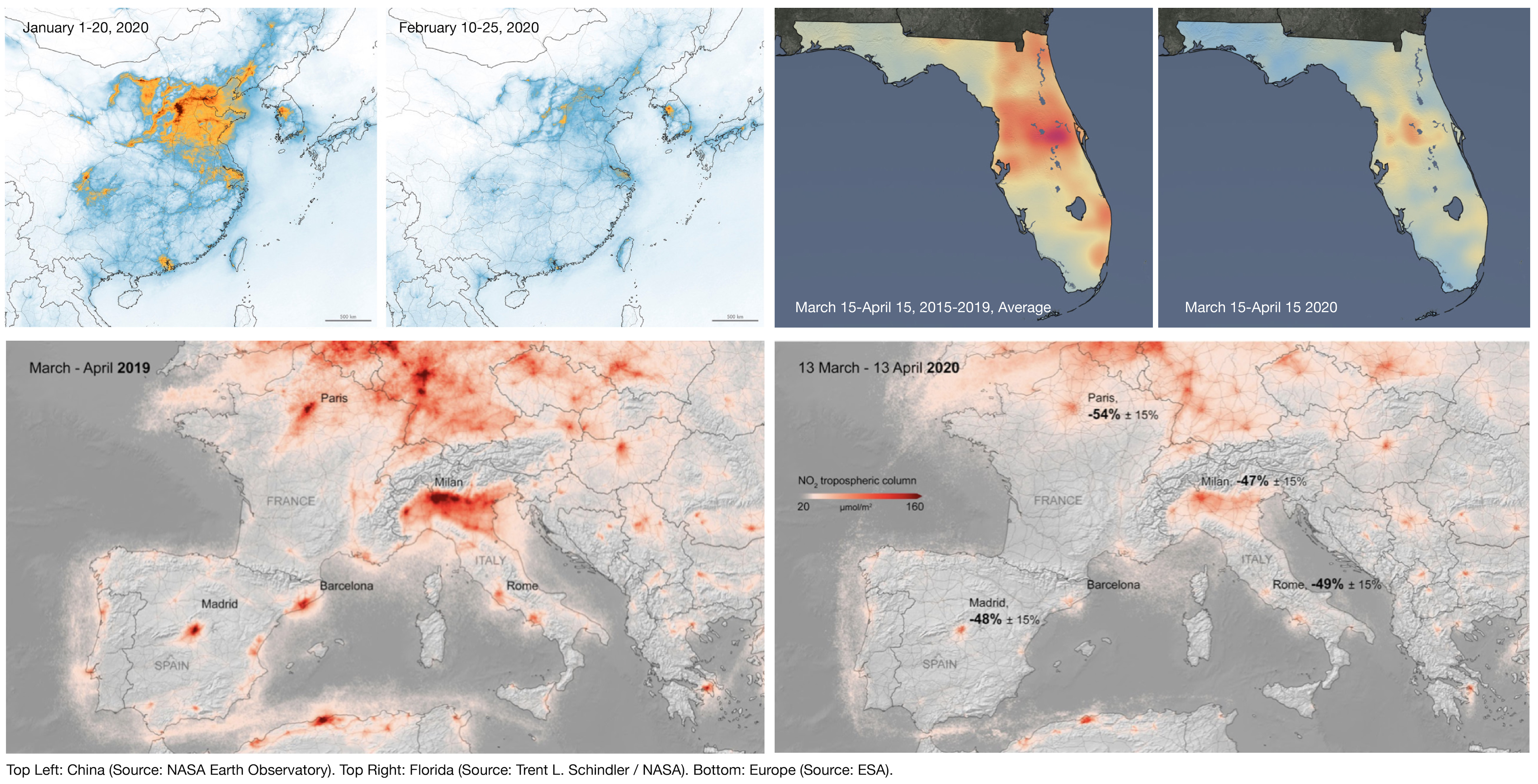 There's a documentary called "The Overview Effect" that interviews astronauts who have spent time in space. The most transformative part for them wasn't getting to the moon; it was looking back at the Earth.

Each astronaut experienced a cognitive shift when seeing this tiny ball, shielded by a paper thin layer of atmosphere, containing everything he/she knew - every person he/she'd ever met. They tapped into the singularity.

When we see these transformative images from above, revealing our impact on an indubitable scale, we can't help but question how we got so far in the wrong direction, thinking of ourselves as separate... Mother spaceship has given us everything we need and know - we need to protect it.

What about the impact on animal life?

In Yosemite, 308,000 tourists typically visit the National Park in the month of April alone. Now, the only sounds in the valley are freshly melted water and gentle winds. Bobcats, wolves, and coyotes are being seen outside cabins. According to one worker in Yosemite, “the bear population has quadrupled.”

Nature has been spreading its limbs back out across the globe. We saw wild boars storm the cities in Paris, Barcelona, and Haifa. A mob of macaque monkeys conquered a plaza in Thailand. Herds of sika deer roamed freely through subway stations in Nara, Japan. Flamingos migrated in record-breaking numbers in Mumbai, up 25% from last year (1.5 lakh in the first week of April). In Thailand, the largest number of nesting leatherback turtles (considered a vulnerable species by the IUCN) was found in two decades.

Aside from these cute animals showing us the impact of human expansion, there's a much greater issue at play. Nature has been rapidly disappearing in the background - every day, up to 150 species are lost. Yet, we intimately rely on a diverse ecosystem for our own health. Dr. Zach Bush, a triple-board certified physician, has noticed a staggering parallel between the loss of diversity in our environment and the rise of chronic disease. Our physical and mental health is directly dependent on the depth of the ecosystem.

Yet, we routinely take antibiotics to kill our bacteria. We spray glyphosate (the active ingredient in Roundup) on our foods which in return destroys soil health; according to Newsweek, almost one pound per person of glyphosate is dumped every year in the US. We treat nature as a contaminant when we are made of and need it. We have to learn how to work in synergy with it.

As we build a company alongside these women, we're working to embed Pachamama in every decision - how can we leave the Earth better than we found it? 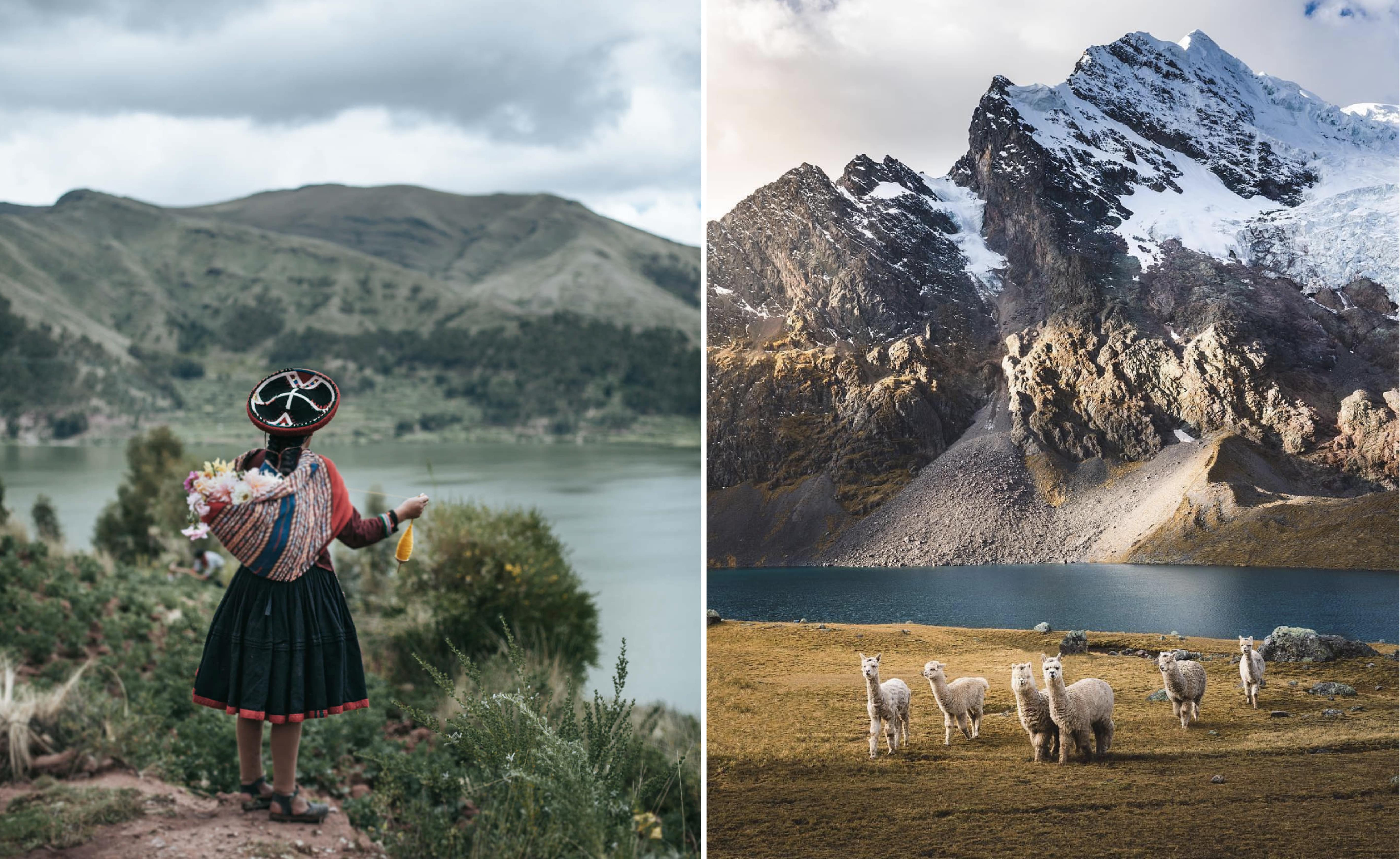 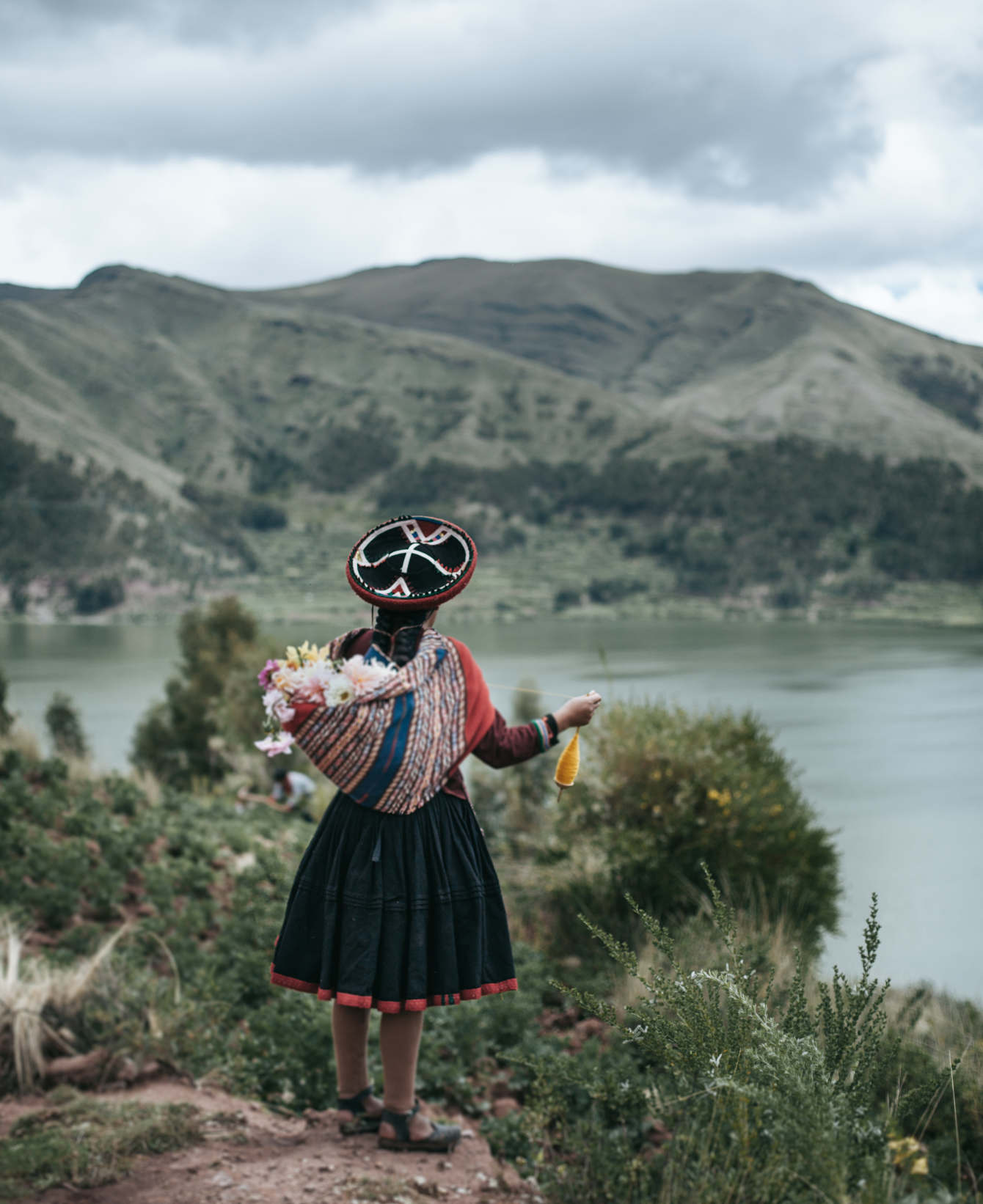 It can feel overwhelming to see these macro-visuals, doubtful that you can change the trajectory of the planet's future. But it's actually quite the opposite.
‍
Every day, you get to choose the 'before' or 'after' photo shown above. You decide to purchase produce from Walmart or a local farmer (even better, buy into a CSA farm in your town). You decide to drive to work, or bike. You decide if your shoes comes from Nike, or a sustainable and innovative company like Allbirds.

It's ultimately consumers who have the steering wheel. And each of these choices really just comes down to caring and not turning a blind eye.

We can choose our tax for living on this planet, and decide where it goes. We can build a % of a sale into a regenerative model. For food, we need a certification past 'organic,' one that promotes biodiversity + rotational grazing (check out the Regenerative Organic Certifiedᵀᴹ label that Patagonia is helping launch). We should give a % of a plane ticket's value to offset the carbon footprint, a % of our monthly power bill to sponsor renewable energy, etc... We truly can set up consumerism to put our money back into Pachamama. It just comes down to making ourselves more accountable.

“We are all time travelers, turning together into the future. But let us work together to make that future a place we want to visit. Overcome the odds, it can be done.”

Science, for a few decades now, has been trying to show us how real of an issue this is. But there was no concrete visual, and so we didn't listen. This global pandemic has forced all of us to sit back and finally give Mother Earth the stage. The virus, in some way, was Pachamama showing us tangible proof of our capacity to change the future. We can see it with our own eyes; there's no question anymore.
‍
If there's one message we can take from 2020 so far, it's that we can affect change when we choose to.

So, what choices are you making?
‍
Love from Peru,

Thank you! Your submission has been received!
Oops! Something went wrong while submitting the form.
learn how we protect the environment.

Thank you! Your submission has been received!
Oops! Something went wrong while submitting the form.